Things have been crazy. I feel like I never know what I’m doing from one day to the next, which is mostly true in the fitness aspect of my life.

I’ve been working out at the gym nearly daily with crossfit workouts. Fitting run time in has been difficult because there isn’t much to do with the kids during a run. I recruited a neighborhood teen last week for one of my runs because I needed to burn off the crazy. My husband was out of town on business and my kids had reached that point in summer break where they can’t be in close proximity without someone getting hurt [physically or emotionally and often both].

I had been off of my depression meds for a couple of weeks and had a day from hell Monday. I was set off by a bad weigh in. I started crying the moment I got back into my car with the kids in tow. Each tried to ask me what was wrong, but they’d been fighting during the weigh in and I’d grown weary of asking them to stop. I cried many more times and for long periods that day. I talked to my husband and to my best friend. I got my emotions under control. I spent the rest of the week very stressed out, but not feeling like my emotions were getting the best of me. I used to be easily driven to tears, but it has been a long time since I openly cried about anything.

Daily, I went to the gym and planned to run independently. I would stay in my workout clothes all day as a reminder that I still had something to do. A run didn’t happen until Thursday. I finally asked a friend if her teen could help me out. I took an hour to go on a very hot afternoon run. It was amazing, honestly. I had a new playlist. I had one of my water bottles frozen for my fuel belt. It was hot outside, but I was finally running faster than I have been lately. I was able to keep up the speed and I probably could have gone further had I not wanted to get back to the kids. Funny how I needed nothing more than to get away from them, but wanted to get back to them. 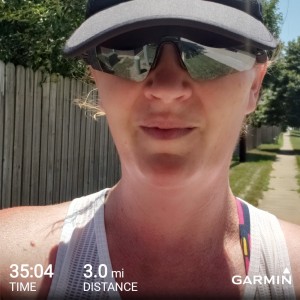 Friday, I knew my husband was coming home from his business trip. I cleaned house most of the day so he’d come home to the house looking perfect. I had time for the gym and I went knowing he’d be home around the same time my workout was complete. That workout nearly broke me. Conditioning was simple. Squat cleans and push ups in varying reps that reduced in each set. Except, I couldn’t do a squat clean correctly and I was supposed to try to challenge myself from the push ups I normally did. My first round of push ups, I couldn’t do more than 3 in a row and my eyes filled with tears by the time I hit 10. I could not be seen crying, so I put my head down and kept trying. I had to bring my leg forward to get my body up a few more times. When I went back to the bar for the squat cleans, I slammed the weighted bar into my shoulder. I started thinking I couldn’t finish the workout and planning to quietly give up. I set down the bar and I stripped weights off of it and continued. I wound up going back to the pushups I normally do [with the plyo box set up at its tallest]. I finished the workout, cleaned up, and went home to my husband finally being back from his trip. I burst into tears instantly. Everything had been so hard all week and I finally got to see him, but I was mad and stinky. He insisted that I wasn’t bad at everything I tried athletically because most people wouldn’t even try. We scheduled me a massage to try to help me relieve the stress. I was still kinda pissed that I bruised myself again right after the Warrior Dash bruises faded. 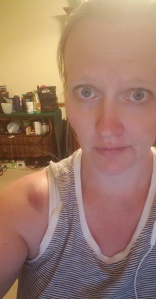 I need to accept that I just have bruises all the time.

I skipped Saturday morning gym time in favor of a visit to my local farmer’s market. I got my massage and went to a local restaurant for an old fashioned and a brie appetizer. I feel much less stressed. I don’t feel doomed to live my life in a loop like I did. I am still aware of the repetitive and often frustrating nature of life. I’m glad to admit that I typically don’t let my mood determine my manners and most people were probably unaware of my feelings unless I said something. If anything, I was the amusing kind of damaged person with the dark sense of humor. That seems to be my prevailing personality anyway.

Tomorrow, I run. I’m shooting for 5 miles. I don’t actually need to hit that distance for 2 more weeks, but I want to do it. Wish me luck and good training vibes. I don’t think I can PR the half in Detroit, but I want to get closer to it than I’ve been since my 2016 injury. I want to believe I’ll be in PR shape by October 20th. I’m still considering Indy in November. Gotta get the “N” medal now that I have the “I” and the “Y” is the year I turn 40…

Thanks for reading! I hope you’re having a great summer! The hot part is kind of just beginning in the Midwestern US, but it’ll be gone before race day, hopefully.