This past Saturday, I ran the 45th annual Steamboat Classic in Peoria, Illinois. While I’d signed up for the 15 k race a few months ago and worked hard to get myself up to the over 9 miles that the race would require of me, I dropped to the 4 mile race when I went to packet pickup. I didn’t take the decision lightly. There was already a heat advisory for the weekend when I ran 3 miles on the Wednesday prior to the race. The humidity was oppressive for each of my runs leading up to the Friday pickup. I checked with my [best] friend, Liz who would be running the race with me, and we agreed that 4 miles was just a better idea since she hadn’t trained for the distance and I wanted to be healthy for my fall half marathons instead of nursing injuries (again). What also helped was that my 4 mile best time was pretty close to my 5 mile time on Athlinks because last year’s Steamboat was tough on the injury I’d been nursing. I knew I could beat that 4 mile time, but my best 15k comes from 2016, which was the year I was in the best shape of my life.

At packet pickup, I asked to join the Athena class for female athletes over 180 lbs. I hopped on the scale and pushed that baby close to the 200 lbs mark. I didn’t try to cover it up from those waiting in line behind the scale. I didn’t insist I take my shoes off. I wasn’t surprised by my weight, either. Prior to my injury, I’d weighed 170 lbs. At the end of 2017, I was tipping the scales closer to 215 lbs. It was so hard to be heavy and to get motivated to try hard again. I’ve worked to lose over 20 lbs over the last 6 months and I’m still working hard at it. I gave it a lot of thought over the weekend and even discussed with my best friend about how there is a difference between saying that I’m proud of my weight and accepting it for what it is. I’m disappointed that it got so far. I wish I was the same size I was when I was 150 lbs and trying to lose weight. I wasn’t strong then. I didn’t run. I smoked cigarettes and I ate crappy food. There is no pride in the sizes that I have been no matter how small or large. The size I am right now, I’ve worked to get to and I continue to work to be a healthier, stronger woman. It’s what I have and I’m working with it. I will always be a work in progress and I’ve accepted that. I’m currently on a 1 mile or more a day streak and it is helping me stay active when I don’t want to be.

I ran a 4 mile race. For the first time in a race we’ve done together I told Liz to slow down at the start of a race and hold a pace and I kept reminding us to hold it. I tried to keep up conversation even when the heat was taking its toll on our bodies. I also felt good about the race, though. I wasn’t slowing down. I checked the statistics from the timing mats. Liz and I moved ahead of 144 people from the 1 mile mark to the finish. We held our pace knowing that it wasn’t a day for negative splits or a PR.

The look on my face says it all…

At the finish line, a tall woman ran ahead of me. A silent agreement between Liz and I had us separating at points if we needed to during races we’ve run together. I took off assuming she might be part of the Athena class and that I’d need to beat her if I wanted to get an award. All the way up through the finish, it was a race. She came in 2 strides ahead of me and I was pissed when I saw that I was 2nd in the Athena class. I was so mad at myself that I didn’t pull those couple of strides out of my pocket and come in ahead. Later on, Liz would pull up the finish line photos and the stats on the Athena class winner. The 1st place Athena had come in 3 minutes prior to me. That woman I had such an intense race with had nothing to do with my 2nd place award. She also had started ahead of me, so her chip finish was a tiny bit after mine. 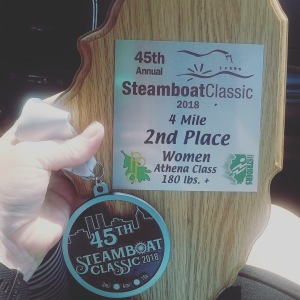 So, I won an award that clearly says on it that I weighed more than 180 lbs when I won. It doesn’t have to mean I’m proud of my weight or that I’m promoting obesity. I’m aware of those people who say those things to heavy women. Although, I did carry that weight across 4 miles in some intense heat and I’m pretty sure some people lighter than me couldn’t do that. I actually got my best 4 mile time. Athena. It’s pretty cool if you think about it.

Time to train for my fall half marathons. The heat has been intense. I’m finally able to feel good in the hotter runs, though. It took me a couple of years to get faster after I started to run. I’ve been out of physical therapy for less than a year. I need to continue to have self discipline, but realize that progress is progress no matter how small. I hope I can run a 5 k in less than 29 minutes again one day. I hope I can weigh 25 or more lbs less one day. It doesn’t happen overnight and working toward it is something to be proud of.

Do you know where the title “Fra-gee-lee” came from? I won a “major award”, you know. There’s probably a movie reference there.

I love comments! Please let me know if you have something you want me to write about. Good luck on your journey!