*Seriously, this one contains some discussion on bodily functions. I wasn’t graphic, though.

Week 12 of training went by pretty quickly. I’d done my speed work on a Tuesday run, missed my cross training on Wednesday, and did my group run on Thursday.

Thursday was when Jane approached me with an idea while we were running. I could tell it was something big. She asked me to consider it with an open mind. Finally,she asked if I wanted to go along for a 20 mile run this weekend (our training calendar is 14 miles this weekend and 20 next). I thought about it. I wanted to know that I could run 20 miles. I had already switched my 18 mile and 14 mile weekend, so I hadn’t done a very long distance the prior weekend. I agreed to go ahead and go for it so we could enjoy our half marathon next weekend without the additional miles afterward in a place we aren’t used to running while a longer race was in progress (a full marathon).

Saturday, I intended to run 5 miles, but not get up right before 6am to go since I didn’t have a group run scheduled. After attending to unexpected things happening around my house, I felt that it was too late in the day to try to run those miles. I mean, I needed to be properly rested for the long run on the next day.

Sunday morning, we met at 7:30 and set out to run 20 miles. It was going by fast and we were enjoying conversation while Jane, Maureen, and I ran together along the trail. At one point, we stopped to take our nutrition things and get a drink. There were a couple of people from our group stopped there talking with a man who organized a race in town and also runs. He was talking about his marathon that was Boston Qualifying time and how the Boston race was the year after the bombing incident. It was nice to hear such a good story while out on a tough run.

At the halfway point, we grabbed more water, had a brief conversation with Chris and Jason from our group. We decided to give interval running a try to save ourselves, and started to head further north on the trial with a plan to run 5 minutes and walk 1 repeatedly. As we began to cross by the highway, my stomach didn’t feel right. I had to tell the ladies that I was having the urge to use the bathroom and I wasn’t sure that I could just hold it for around 10 miles. We walk/jogged to a gas station where I used the restroom, fought with my compression pants to get the sweaty things back over my sweaty butt, and set back out to finish the run by walk/jogging back to the trail. We got to our turn around dodging brave grasshoppers that weren’t moving out of our way as we ran by.

We reached a point on the trail near a train station where I suddenly felt unwell again and I showed Jane and Maureen that I was covered in goose bumps. Jane insisted that we stop and walk while I drink and take some of my electrolyte pills. Once all of my water was gone, we walked a little further, then picked back up to our intervals until we got to another water fountain to refill my bottles. We set out after taking our drinks and I was suddenly overwhelmed again by the feeling I needed a restroom. We were within a mile in both directions of a bathroom. I encouraged my running partners to go ahead without me. They offered to wait for me at the next bathroom so they could stretch. I felt so strongly that I was going to have an accident, I attempted to hide behind a tree and yank my pants down. The same ones I couldn’t get up at the gas station. I saw a bicycle approaching and I realized they could see me. Yeah, so I yanked the pants up and jogged to the porta potty barely stopping to throw my running belt onto a picnic table and literally running into the door on my way in. I made it! With a little over a mile to go, I actually was able to pick back up to running again until we hit 19.5 miles. I fell behind my running partners again. I only caught back up once before needing to walk with a little over a quarter mile to go. When I got in, my friends were there and told me that I was covered in goose bumps again. I drank more and then I went to my car to get my cooler with my protein shake and electrolyte drink. We did our stretches and headed home after a short ‘selfie’ session. 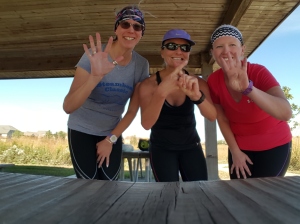 When I got home, my stomach was still not right. I was cramping and I didn’t feel like eating anything, so I tried to just eat some bread and drink a fruity electrolyte drink. When I told my husband about the misadventures of my run, he briefly thought about it. Then, he told me that perhaps we’d eaten something bad the day before. He had been up and down much of the night needing to use the bathroom and had a bit of a sour stomach himself.

This was so relieving to hear. I honestly thought that I had let anxiety get to me and it was presenting physically. I was worried that my gels made me sick despite them never having an ill effect on me before. I swore I’d take an anti diarrheal medicine before the big race. I discovered I probably had a touch of the ever popular “food poisoning” that people refer to as the “stomach flu”.

I’m able to walk just fine today. My joints are a little sore, but I am not like I was yesterday right after I’d finished. We made it 20 miles and lived to talk about it.

Yesterday, over dinner, my teen seemed put off that I said we were planning on walk/running the upcoming race. Her question was “So you’re not running the whole thing?” I tried to explain to her that intervals are not unheard of and many people do it. She seemed disappointed and asked “So do you even run your half marathons?” I told her that I do, in fact, run my half marathons without intervals. I also explained that by taking the walk breaks actually increased our speed overall by decreasing the fatigue. I think it needs to be understood that moving forward for many miles is impressive no matter how fast or slow. If you finish, be proud.

I was not sure  I wanted to share my bathroom shenanigans. I mean, it was terribly embarrassing. I know I’m not the first person to have a problem on a run and I most certainly won’t be the last. I hope that you can find the positive things to look forward to in the long runs and embrace them.