Last week, my husband was out of the state on business and I was holding down the fort on my own Monday thru Friday. Fortunately, there are a couple of days in the week where all 3 of my offspring are at school and I used those days to squeeze in my running. While I was still having the occasional coughing fit from the cold I recently fought with, I needed to lace up and run.

Tuesday, I headed out right after dropping the little ones off at school. My toe was a little stiff, so it took me awhile to warm up. Once I was almost 2 miles in, I was running some of my fastest splits of recent. It was fun and I was glad to get out and do it. Thursday, I put off running most of the day because I thought it was going to rain and I like making excuses when I’m tired. After I’d eaten lunch, I decided that I needed to get in a run since a 5k was on the calendar for the weekend and I’d been poorly training since the half marathon at the start of April. I had a great time running. It felt incredible just to get out and do it. I don’t remember how fast I went without checking my ‘connect’, but that doesn’t matter. The run felt good and I felt good after.

Saturday morning, my husband and I enlisted the help of the teen to watch the younger kids and we headed out to the local baseball diamond for the race. It was chilly out, but I stuck to my guns on wearing capri pants and a short sleeved top. I wore a windbreaker on top for comfort in waiting for race time, but I had it off before going to the starting point.

This race was more about the cause than anything else. A young man in our community was killed in a collision by a drunk driver despite him being in a vehicle with a designated driver. The drunk driver was speeding in excess of 100 miles an hour and was not on an interstate. There was an emotional ceremony before the race, then we were walking over to the start. 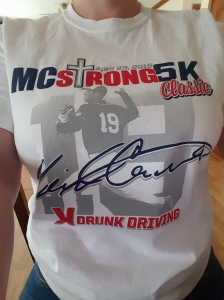 Somehow, I wound up in the front of the pack in the line and I decided to just stay there. My husband had been fighting off the cough and congestion, so he decided to run with me since he wasn’t in ‘race day’ shape to go his usual [much faster] pace. We started on an incline. As I glanced down at my watch, I saw I was going a little fast for my average pace. I analyzed that I wasn’t too uncomfortable to continue, so I went awhile at that pace. I knew in order to beat my 29 minute St. Patrick’s 5k, I needed to stay near the 9 minute mark per mile for the majority of the race. My first mile was 9:02 on my watch. The person calling the time was a little further down the line from where my watch beeped for a mile and he called out 9:30 as I passed. Oh shit. I’ve got to pick it up to get on this. I can only average 9:15 at the worst to get it. Second mile, panting, whining to my husband “I don’t think I can sustain this speed for the rest of the race,” but somehow putting one foot in front of the other and thinking about how badly I wanted to kick my own PR (personal record) in the butt. I pull the second mile in 9:22 due to some very nice downhill time, I think. We get to a spot where we’re running on the trail and the people ahead are already on the way back to the baseball diamond. I see a water fountain and I wish I could stop, but I just couldn’t make myself pull to the side. I tell my husband, “I might puke. I’m going to throw up.” He shakes it off, tells me to keep pushing and that I can puke when I get to home plate, which is also where the finish line is. Our local police chief passes us on the trail and I giggle and tell my husband, “you just got passed by the chief,” and I see him slightly turn his head and I realize, “oh, so did I.” We run through the trail and my watch beeps for another mile, 9:22. I say, “shit, shit, shit….” aloud because I know that wasn’t on target. Excuse my potty mouth, the filter in my brain fell out on the course somewhere. That is not unusual. So we get into the gate and the course is in the gravel on the outfield until we reach the 3rd baseline, where we are to run it home to the finish from 3rd. I see the time and even though its already past 29 minutes, I pull the last bit of energy out of my legs and cross the finish line at 29:10. I stopped my watch and it said “Best 5k 28:43.” So my watch says I beat my best time by over 15 seconds, but my official time doesn’t. I’m fine with that. Now I know I can do it and I’ll have more opportunities to do it. I also was 9th for my age group, so I pulled a top 10. Also, I ran with my husband in a race. It was so sweet and he was really good at encouraging me the whole time when I was hyper focused on getting a PR because of the half marathon race I had in Springfield. 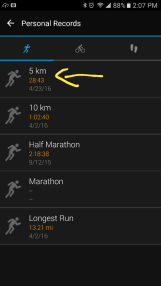 May 7th, I have a 12k race. I have no PR for that because I haven’t done that distance. I’m doing it primarily because it sounded like a good time. My next 5k is June 4th. The Superhero Dash was my first 5k race and I run it because of the cause and now because its a yearly tradition since 2014. I’m also already signed up for a 15k in June and another half marathon in October. So, good luck to you on all of your upcoming races and your goals! Please feel free to drop me a comment or share this with your friends. I hope you find encouragement in my posts!