The term “never say never” could apply to so many things for me. I mean, before I started running I thought I’d never run for fun or even consider it unless I was being chased. When I ran the half marathon in the first weekend of April, I swore I’d never run another half marathon and probably wasn’t going to try anything further at any point. When I was sick a couple of weeks before that, I said that I “never get sick.”

I have had one hell of a time with my energy after recovering from an illness that went on nearly two weeks, followed by a 10k race and a taper week before the half marathon race. The first week after the half marathon race, I went on a 4 mile speed workout on Tuesday evening. My energy was quickly spent causing me to struggle in the last mile more than I normally would. I have been doing a squat challenge in addition to continuing running, and I was feeling sore the entire week. Saturday morning, I intended to run 8 miles when I first got up in the morning. After working with my group training for a 5k race, I realized I wasn’t in it for too much distance. I was fortunate to find someone to run 5 miles with. They were unfortunate enough to have me to run with . My body was tired, I got a side cramp and had to walk it out. I got too warm and had to stop to pull off a layer because the way I’d dressed was good for run/walk intervals, but not for a distance run. I was surprised at how a week after running 13.1 miles, I was struggling to get myself to finish 5, and I didn’t finish it without a few bumps in the road. By Sunday, I was sore everywhere. While I’d planned to restart my running streak because Saturday was day 100 of the year, I knew I couldn’t do it. I assumed I injured myself by overusing my running shoes and I rested to see what would come of it. By Monday, I realized that I was sick again. Even though I “NEVER” get sick. I hadn’t gotten a stomach virus in years before the one that took me down in March. I hadn’t gotten a cold with a fever in years until this week. I was sneezing, coughing, tired, and definitely not hungry. I ran intervals again Tuesday and tried again to run afterward. My feet were still tender and my voice still hoarse, so I struggled through 2 miles. I was fortunate to have other people with me to keep me going. I chose to rest the next few days in the hopes that my energy comes back and I get back to feeling like myself when I lace up my shoes.

What didn’t cross my mind until someone mentioned it: maybe I’m being hard on myself. I can’t be mean to me if I want this to be enjoyable. I know I can’t get any better if I don’t challenge myself. I know that sometimes I’m going to be uncomfortable, and that’s okay. What I don’t want to do is make myself think I’m failing when I’m learning. I’m fairly new at being an athlete. This is the first year I didn’t take a break from running during the winter. I finally don’t have to start over with running after months. There is a part of me that doesn’t want to take off for too long while I’m sick because starting over is such a pain. The good thing about being afraid to get too far behind is that it’s probably unlikely to happen because I know I still want to run.

So what am I doing? I’m running tomorrow (Saturday) on run/walk intervals with ambitious people learning to run a 5k. I will bring the appropriate attire for a longer run with me to our meeting place, adjust my wardrobe as needed, and put a few miles in to flex my running muscles. I have a 5k race next weekend, so I suppose I’ll do some speed work early this week. I’ll then have to commit to doing the long runs after the race. I think that leaves time for me to recover from having been sick and time for me to give myself enough rest. I also think it’ll give me a little time to break in my new shoes. My soreness may have been from me starting to get sick, but there’s no point in taking chances on injury. I’m planning to be an athlete for awhile, so I’d better get good at knowing when to stop, go easy, and go hard. I can’t wait to see what my next run teaches me.

I’m also considering doing the “GO! St. Louis” marathon or half marathon next year because I saw so many pics from it this past weekend and it looks fun. My friend, Cathy, took a pic from the run across the bridge where you get a view of the downtown skyline and the Gateway Arch. I think that would be really cool. I’m from St. Louis and the Arch is one thing that really stands out to tell me I’ve arrived. 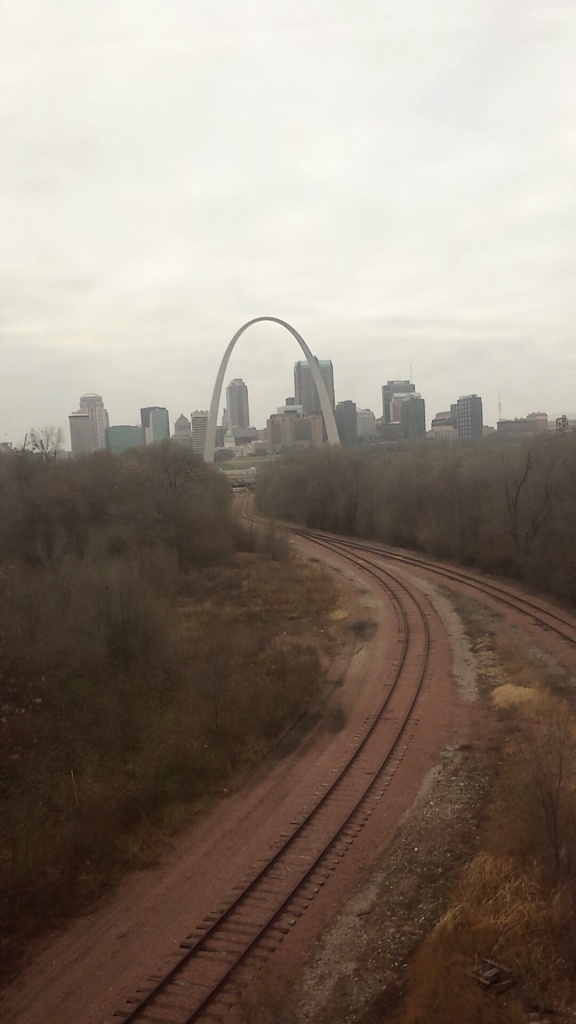 I took this from the train (obviously), but you get the idea…